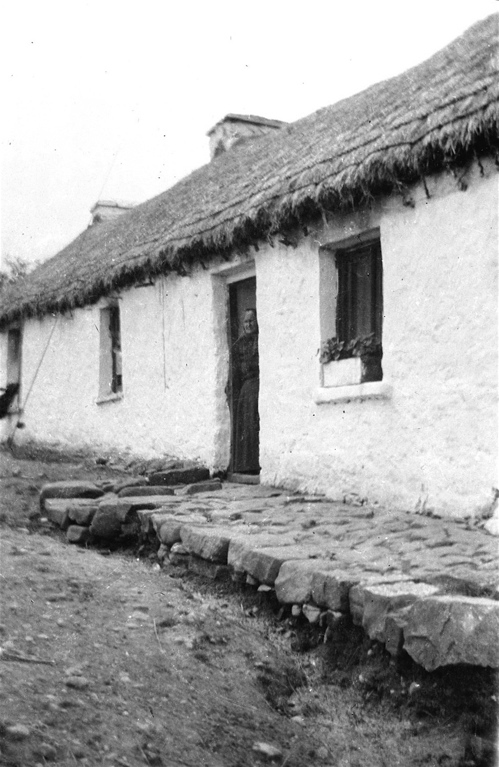 The farmhouse at Kilsallagh was situated south of the Owenmore River near the village of Bellacorick, Mayo, Ireland.  During the C17 this part of Ireland became known as the Barony of Erris. Dermot remembers his uncle, John Carolan, referring to an area of the farm as ‘The Mearing’ – an old English word for the furrow ploughed by a settler to mark out the limit of his claim. From this evidence it seems possible that the Carolans may have been squatters to begin with, before eventually being provided with a tenancy and required to pay rent.

By the mid-C20 the farm consisted of approximately 960 acres of hill land on the slopes of Corslieve/Slieve Carr, rising to 2000 feet. Because of the location and poor growing conditions in the wet and acid soil it was mainly used for keeping cattle and sheep.

I’ve always assumed that the name Kilsallagh was unique to the Carolans’ farm but a Google search brings up a number of references to houses in ‘Kilsallagh, Westport’, and a Wikipedia entry refers to the townlands of Kilsallagh Lower, Coill Saileach Íochtair ‘lower wood of willows’, 702 acres (2.84 km2) and Kilsallagh Upper, Coill Saileach Uachtair ‘upper wood of willows’, 347 acres (1.40 km2), close to Lecanvey. To add to the confusion the 1911 Irish census gives the address of the family not as ‘Kilsallagh’ but as number 5, Uggool, Glenco, Mayo.

In the meantime some information here about the Owenmore River  – click the ‘River’ tab for photos. If you zoom in on the map you can see stretches of the N59 road west of Bellacorick labelled consecutively as Kilsallagh, Tawnaghmore, and Laragan.